Have you ever been out drinking a beer at your favorite spot and thought, I’d really like to take home this glass? Either one of two things happened. Option 1: You pulled a Winona Ryder and took the glass blatantly disregarding social etiquette and screwing over your watering hole because glasses aren’t cheap. Option 2: You left the glass because you were civilized and continued to dream about adding to your fledging collection.

Well the Buffalo Wing Factory is giving YOU the chance to put on your klepto shoes this Friday without any of the unfortunate consequences that go along with theft. How? Simple. Come to the Chantilly BWF this Friday and order a beer by Fat Cat Beer Company and you get to take home a custom pint glass.

Fat Cat will be serving all five of their beers. Their IPA will be $6 in 16oz cans and the other four beers will be $4. Glasses and beer are limited though so make sure you show up early. The event runs from 7:00-10:00pm at the bar only.

Hold on, I have one more surprise for you. I can’t promise anything but at the time of this posting, all BWF locations still have a few remaining bottles of Hopslam. Get them while they last!

Lastly, there are 30+ other beers to choose from including Sweet Baby Jesus and a bunch of other local VA, MD and DC beers.

I don’t want you to miss any upcoming events, news, interviews or posts. Sign up at the bottom of this page to receive email updates to stay up-to-date with everything on Short On Beer. Cheers!

Every year fellow beer blogger Bryan Roth and his friend Justin take a roadtrip to Dogfish Head in Rehoboth Beach, Delaware affectionately called, “Beergrimage.” This year their wolfpack grew by one – me.

You can find Bryan’s write-up on our adventure here

Take a roadtrip from our meeting point in Washington, DC hitting up four breweries on our way to the Atlantic. These breweries are DuClaw Brewing Company, Eastern Shore Brewing, 16 Mile Brewery and lastly Dogfish Head Brewpub. Mission accepted.

**Note: Justin manned up and was our responsible designated driver for the whole trip. Don’t drink and drive.**

We climbed into Justin’s Mazda and left DC around 9:30am making our way up to Bowie, MD to DuClaw Brewing Company. We were those guys knocking on the door to let us in at 10:59am when they open at 11:00am (hey, it was cold out). You can’t drink all day if you don’t start in the morning. Here’s what I ordered (from left to right in the picture): 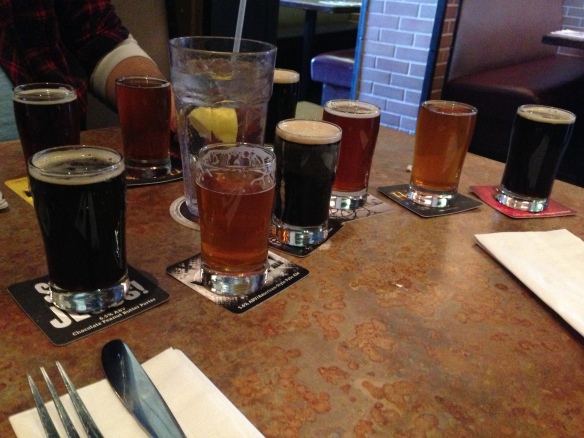 Each was a delicious 4-ounce pour. I can’t complain about any of them. The dark beers were all superb making it really difficult to choose my favorite. You can’t go wrong with Sweet Baby Jesus, Bad Moon Porter or Naked Fish. Their Cuban sandwich was spot on and gigantic especially for only $11. 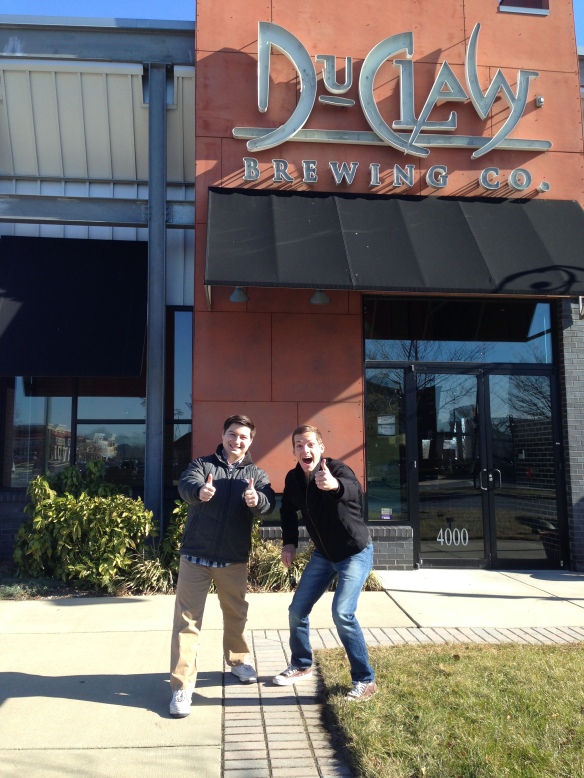 Outside of DuClaw — Me (left) and Bryan (right)

With full stomachs and some beer in our systems we headed to our next stop about an hour away in St Michaels, MD – Eastern Shore Brewing. The tasting room looks like a well-lit hunter’s cigar lounge. Comfy chairs and couches surround the wooden walls with animal heads and guns held by deer hooves on them. There was a small L-shaped bar to the right of the entrance where we pulled up at. 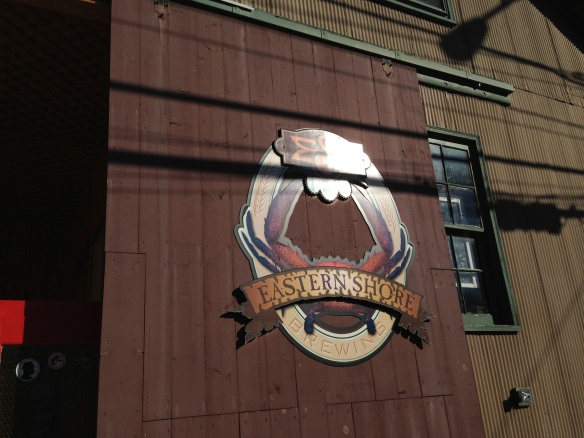 Byran and I each got a flight of their 5 beers. The kinda weird, super optimistic bartender explained that they brew based on the season meaning we’re going to get darker beers. Cool – right up my alley, right? Well not so much. We each had a scotch ale, black IPA, amber ale, a porter and the same porter on cask infused with coco nibs. The beers were all very thin-bodied and felt watered-down. They weren’t filled any with off-flavors or a ton of flavor of any kind. Only the cask porter with coco nibs had distinction to it. Too bad. But we weren’t about to let some watered-down beers ruin our trip.

Aside – The brewery is adjacent to a winery AND a distillery. This might make for a fun afternoon if you’re in the area. Just hit up the brewery last and maybe the beer will taste better.

I wish that I had seen the movie 8 Mile so I could make some joke about how 16 Mile is twice as good as it. I digress.