Today, January 9th, marks the first birthday of this website. It’s been a wild ride. I recapped most of it’s milestones last week here. Thank you so much for continuing to visit and share on Short On Beer. On with this week’s TWIB…

On New Year’s Eve I hosted a few friends for dinner and drinks. I’d like to point out that originally it was supposed to be just drinks. But The V, which we booked in early December because they didn’t have a set menu, called two days before and said they decided to have a (pricey) set menu. So we cancelled the reservation and with it being this close to the NYE everything was already booked. My friends Jeff and Meredith grilled us up some filet mignon and everything turned out okay. 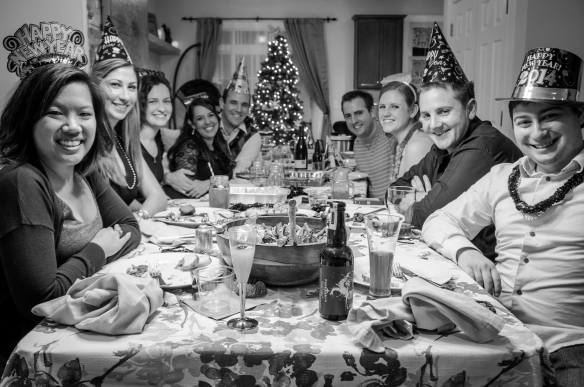 Filet mignon seemed like a perfect pairing for Adroit Theory Lux, a bourbon barrel-aged wheat wine I’d been saving for a couple months. Here’s what I can recall since I was a few beers in at this point. Lux was boozy. In fact, that’s the majority of what I can recall about the beer. Boozy. It wasn’t particularly carbonated. It had a murky brown color and was flat out boozy. This beer wasn’t for me but feel free to try it for yourself. 9% ABVers like Lux usually aren’t. The other beer I’ve had from Adroit Theory B/A/Y/S, an Imperial Stout, was also a 9% ABVer. This was also quite hard-hitting.

I drank Lux and smiled as always. I learned that trick downing cognac after cognac with my father-in-law even though I am now a huge fan. Pledging might have been a factor in this trait as well…

I was then feeling quite good after a couple more beers including Lost Rhino HopStar, which I wasn’t a fan of either. I decided it would be a good idea to make Irish car bombs. However there was no Guinness or Baileys. I can’t tell you why but everything always seems like a good idea at 1:00am. That’s why I’m usually asleep by 10:00pm. Using a Trader Joe’s Stockyard Oatmeal Stout, some generic Irish cream liquor I had in the back of my fridge and of course Jameson I concocted this evil. Learn from my mistakes — makeshift Irish car bombs are a bad, bad idea (AMIRIGHT, LBS??). I lived with a minor headache in the morning but wasn’t feeling up to drinking again until Sunday when I met the $13 beer.

The $13 beer and Walter Mitty

Sunday I went and saw The Secret Life of Walter Mitty at the Alamo Drafthouse Cinema. Their bar, Glass Half Full, is one of the best places, and my favorite places, to find an interesting or rare craft beer near me. Their prices fall in line for the most part with other bars/restaurants in the area. You’ll be paying $6-8 for most of their beers, which I don’t mind. That’s average to slightly above average and it’s worth it because they are good people and serve fresh beer out of beer clean and the proper glasses. However their board doesn’t list prices. This isn’t really out of the ordinary either. So when I order a beer that’s $13, maybe a little warning would be nice? What made it worse was that Mrs. Short On Beer was with me so of course I’m momentarily scolded for the purchase (-1 beer credit for frivolous spending). I’m cool with paying $13 for a beer. Just give me a heads up before pouring it.

It’s okay though. The beer was worth every penny. It was a Hugh Malone by Allagash Brewing. Hugh Malone is a Belgian-Style IPA. It had a rich, golden color with a thin bright white airy head. There was a constant strain of bubbles that floated up from the center of the glass, at least until the lights when out in the theater. Very good beer even after the buttery popcorn wrecked my taste buds.

As far as the movie went, I recommend it. There are a lot of special effects and you don’t notice any of them. Awesome VFX work and cinematography. My favorite part was the music. It has a kick-ass soundtrack including a bunch of songs by Jose Gonzalez.

Have you checked out the CBB from the other day? We met Brad Westmar from the Craft Brew Crew. Brad and I talked about making YouTube videos, St. Louis beer, Trader Joe’s and more. Check it out if you haven’t already.

On Monday night I was able to record the next CBB with Doug from Baltimore Bistros and Beer. I’ll have that one up for you early next week.

One of the coolest parts about CBB is actually getting to see and hear these beer bloggers. I have no idea how guys like Nick McCormac, Tom Aguero and Doug would look or sound. It’s a blast to connect with people from all across the country (maybe the world one day) just through an Internet connection and a love of beer.

How was your week in beer? Try anything new or have an exciting story? Leave it below!

Enjoyed this post? Prove it by liking it below. Make sure to sign up to receive email updates for new posts by entering your email address at the bottom of the page so you never miss anything!