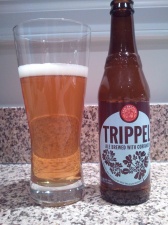 The beer of the weekend – New Belgium Trippel

It took 20 minutes of pacing the beer aisle of Harris Teeter last Friday but I decided to pick up a six-pack of New Belgium Trippel, which I had never had before.

New Belgium, out of Fort Collins, Colorado, has brought us great beers such as Fat Tire, Snow Day and one of my favorites, the retired 2˚ Below.

I poured the Belgian style ale into a Weizen glass. It had a white head that lasted two or so minutes. It was very carbonated and bubbled for a long time. It had an orange-brown color and was extremely see-through, helping to accent the bubbles.

It smelled of coriander and oranges.

It tasted toasty ending with the hops. It had a light/airy texture. I could really taste the spices. The aftertaste resonated for a while after each sip.

Maybe I was craving bacon at the time but I think it’d go great with a BLT on white. Also I think I’d go well with a hard, sharp Parmesan.

Even at such a high alcohol percentage, I could have quite a few of these in a row. I was pleasantly surprised in how much I liked it and have already bought another six-pack.

What new beers have you had recently that you’ve enjoyed?