Pliny the Elder — learn what this is newbie

Brew fests. Bottle shares. Neckbeards. Pliny the Elder. Wax seals. Hipsters eating pickles and Srircha. Tulip glasses. Sam Calagione. Cicerones. The thing about craft beer is that it can be so many different things to so many different people. And there’s plenty of room left for everyone to grab their own plot of land in this wonderful time of craft beer’s own Manifest Destiny. Craft beer is a journey.

You have a choice. You can make craft beer into anything you want it to be. Some want to homebrew. Others want to host events. And some just want to be able to recommend a beer for their friends when they go out. But, for me at least, you don’t know what you want out of your journey until it’s already happened.

Craft beer isn’t even like one of those choose your own adventure Goosebumps books. There are no predetermined routes to take. A choice on page 3 of your journey won’t end up with you getting eaten by some werewolf at an amusement park or having a witchdoctor shrink your head. Page 3 is just page 3. It leads to page 4 and might have an affect on page 251.

You never know what friends you are going to make (Oliver, me and Bryan) 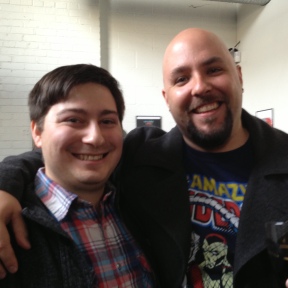 It’s not often you are given a blank book to write. So what if you’ve been drinking BMC (that’s Bud, Miller, Coors newbie) since you were 17. That’s okay. The people here don’t judge. It’s completely different than any other community I’ve ever been a part of. Yes we have our disagreements but at the end of the day I think any one in the craft beer family can sit with another member in a musty bar and enjoy a brew together. 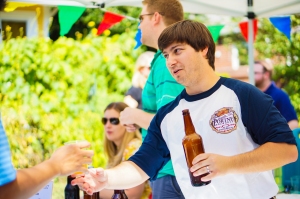 Where is your journey taking you?

Everyone’s journey will be different. There is no ceiling to what you can obtain on yours. No matter what page you are on, craft beer is a journey. Your journey.

What page of your journey are you on? What’s been the biggest, unexpected thing to happen along it?

This is part of a series of posts by Mid-Atlantic beer bloggers. Tomorrow Liz Murphy from Naptown Pint has a new word for you. Check out the other advice for craft beer newbies:

4 thoughts on “One Word of Advice to Craft Beer Newbies”