Beer Mission #1: Give a friend a beer they have never drank before

Many people accepted this mission, me included of course.

You can never know for certain how something will turn out now matter how you plan it. Despite knowing this I still crafted this whole plan on how I was going to complete Beer Mission #1. I was going to bring X beer over to X friend and he’d have X reaction. Yeah, that didn’t happen. 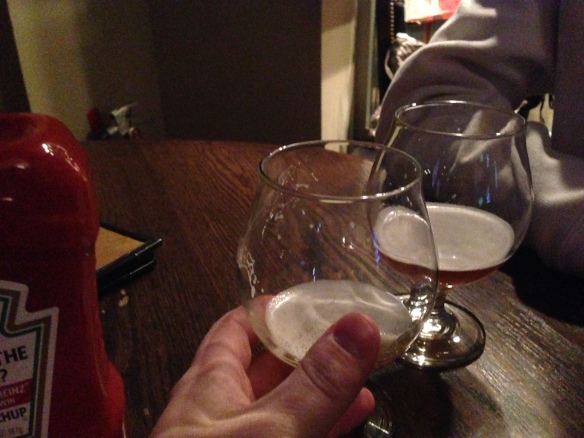 Friday night on a whim I met some friends/old co-workers up at TJ Stones, a bar around the corner from where I used to work. My buddy Scott was standing there empty-handed when I walked in. Scott is into craft beer, he homebrews and has high aspirations of one day making it in the industry. Scott has no beer + Scott likes good beer = I should knock out Beer Mission #1 right now!

I made my way through the crowded bar and read the specials on tap. There was some Oatmeal Stout that sounded right up my alley and a Rye IPA by Bell’s. When the bartender got over to me and I asked for the Rye IPA but was told that that’s not an option right now because they have a keg of Hopslam. PERFECT! I pushed aside the idea of the Oatmeal Stout and ordered up two Hopslams. After forking over a small fortune I returned to Scott and told him to try it and guess what it is. He got [Imperial] IPA right off the bat. He ran through a number of guesses included Lost Rhino Face Plant IPA. But after 5-6 guesses I finally told him and he had never heard of Hopslam! I couldn’t believe it. He was very appreciative of the beer and offered to buy me one in return, which I had to turn down after a long day, longer drive home and ~10oz of a 10% ABV beer in me. Beer Mission #1 complete!

I’d like to think that regardless of surprising my friend with a beer he has never had that I would have had a good time. But adding this twist made the night even better because we got into a long talk about Bell’s and IPAs and I got to introduce him to Beer Missions.

Did you complete Beer Mission #1 yet? Share your experiences below! Look out for Beer Mission #2 later this week. Make sure to subscribe to the email list below so you’re the first hear about new Beer Missions.