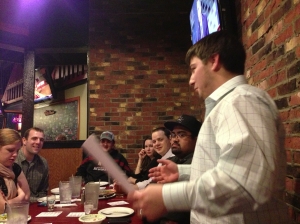 Last Friday, February 22nd, was my big debut as a craft beer professional. Well, almost professional. Getting paid in beer is close enough. My buddy got me a gig hosting a craft beer tasting at a local restaurant, the Buffalo Wing Factory. I represented five beers all from different breweries.

The Rhino Chasers Bohemian Pilsner by Lost Rhino in Ashburn, Virginia was our first beer. I explained a bit about the history of the Pilsner and cold-fermented lagers. This was paired with an avocado salad with bell peppers, tomatoes, cilantro, sweet onions and lime juice.

We then moved onto the Washington’s Porter by Williamsburg Alewerks. It was the surprise of the night. It was very well received from the eight attendees. Many of them weren’t expecting to like a beer this dark but they enjoyed the chocolate flavor and it paired well with the grilled spicy havarti cheese and cilantro pesto on sourdough. I tried to teach a little about how porters came about in the late 1600s in London but I think everyone was more focused on their beers than the history lesson.

Next up was the Sierra Nevada’s Ruthless Rye IPA. This beer packed a hop-filled punch, which was accentuated even more by the spicy marinated jerk chicken sliders. Our taste buds were hurting a bit after this one. I was able to speak about how the brewers at Sierra Nevada took hundreds of attempts to come up with the right Rye ratio.

Then we moved to one of my new favorite beers, Tank 7 Farmhouse Ale by Boulevard. I highly recommend this beer. As one of their brewers told me, it’s a delicate Saison that can stand up to bold flavors. Despite having worn out taste buds from the previous beer, it was still well received. At the end of the tasting the participants get to choose one full beer of the five sampled and the Tank 7 was selected the most. For this beer I told the story of the founding of Boulevard and how Tank 7 was created as the base beer of another beer the brewers at Boulevard were trying to make. This was paired with cheddar cheese.

Finally we reached Butternuts Moo Thunder Stout. Poured from the black can with the cartoon cow on it, I finished the night with a quick description on the different between a porter and a stout (hint – there isn’t really any anymore except their color). This was paired with a brownie.

I finished the night with a description of my Original Gravity to IBU ratio theory and gave out a sheet with some unorthodox suggestions of beers to try if they liked a certain one.

I went into this night a nervous wreck but came out feeling confident. By the Ruthless Rye I felt like I was in a groove and was humbled to receive applause at the end. I hope I have the chance to do another one but in the meantime I plan on trying to host future events at my house. This will be in the works in the coming weeks.